House of Mosaic is an unique venue with Local Art & Antiques. We host meetings, special events and weddings. Our company has been designing and hosting events since 1994, and we are passionate about what we do.
House of Mosaic occupies a land today known as Eagle.  Its history rests undoubtedly close to its owner, Fernando Mansur. This land belonged to the ‘Arend Petroleum Maatschappij’ (Eagle Petroleum Company, by the Royal Shell Group) and undertook operations from 1927-1953. The ‘Arend’ played a key role in delivering fuel to the Allied Armies in World War II for the invasion of June 6th, 1944.

As a consequence, our island has been torpedoed by the Nazis during the war! Providentially, none of the torpedoes intentionally exploded. Fernando’s mother, Marjorie Henriquez-Mansur, was a witness to when one of the submarines which submerged, with the intention to bomb the island. It is said, the captain has visited our island before the war, and could not bear bombing the children… as they may be offspring from people he has met on his trip. The submarine receded without launching a torpedo.

The directors of the ‘Arend’, who came from England & Scotland, are Great Uncles of Fernando (Mother’s side). Fernando’s future was set in stone as a cultural melting pot, when Marjorie married the Lebanese descendent Jean Jospeh Michel Mansur. 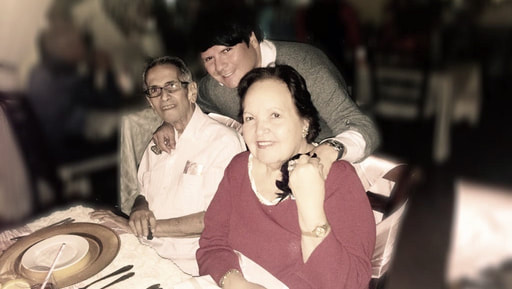 L to R: John J.J.M. Mansur, Fernando M. Mansur, Marjorie Y. Mansur
After acquiring one of the director’s houses… Fernando’s journey began. Having a background in theatre and politics, he created a dream world redesigning the house, where the convergence of cultures as they once were, and perhaps even lost through time, would be resurrected with a new existence. This secret hideaway would be the genesis of House of Mosaic in the heart of our city Oranjestad… His passion for interior design, art, culture and theatre would quintessentially embody House of Mosaic. Mosaics are not per se the focus here, but local art, antiques, family heirlooms and costumes come to represent the Mosaics of Life. All paraphernalia you would unearth here, all find a new life in House of Mosaic. 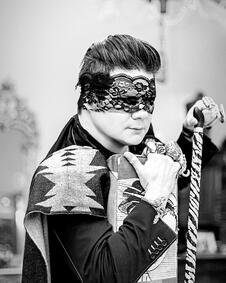